Have you ever wondered about the path a bicycle takes on its way to a lucky kid at the Holiday Bike Drive? So much time and love goes into each bicycle, now you can follow one bikeâ€™s transformation.

In a series of web posts this fall, we will follow the path of one 12â€³ â€œCrocodile Cruisinâ€ to show you how the magic works. We sure canâ€™t refurbish 500 bicycles on our own! Along its way to the 2008 Holiday Bike Drive, this little red bike will be handed over by a donor, collected at a community-initiated bicycle collection event, cleaned and refurbished by volunteers, and triple checked and adjusted by mechanics. 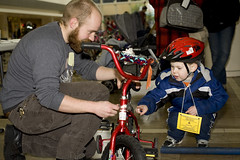 Early in the morning of Dec. 14th, as snow started to swirl and wind began to blow, the Crocodile Cruisin’ was wheeled into the atrium of Legacy Emanuel Hospital for the 2008 Holiday Bike Drive. The little bike was decorated with a festive bow then left to await its new rider.

A few short hours later, despite the worsening storm, children and their 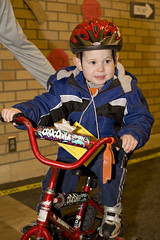 families began to arrive at the event. This little guy chose the Crocodile Cruisinâ€™ from the 600 available bikes and watched intently as Evan adjusted the bike to a perfect fit.

As the morning progressed, so did the storm, and by 10:30 we made the very difficult decision to cancel the Holiday Bike Drive. We sent volunteers home, but a crew of volunteers agreed to stay because many families had already begun to make their way to the event.

Throughout the day and despite the weather 190 children received warm welcomes, lessons in bike safety, new helmets, and very special bikes of their own.