Have You Seen Our Billboard?

We are so grateful to be rounding out this year with such an incredible staff and community of supporters. Thank you for joining us for the ride!

It’s been a while since we’ve taken a staff photo together so we figured the unveiling of our first billboard would be a good occasion for one. Almost all of the Community Cycling Center folks were in attendance, and we still easily fit under the 50-foot sign on the side of ReRack. What do you think? 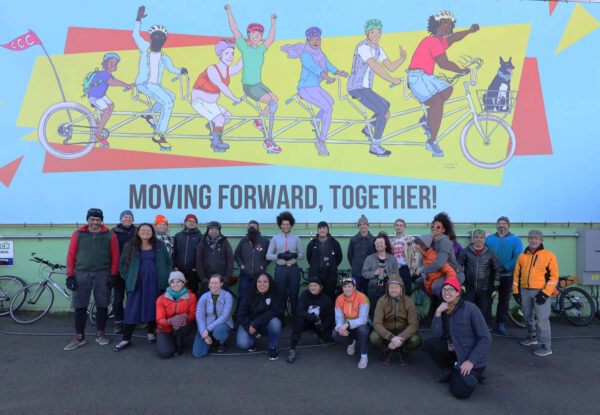 ReRack and the Community Cycling Center (CCC) began our relationship this past June. Starting the conversation felt intuitive: a bike-advocacy nonprofit working together with a business that sells bike racks. While the fit between the organizations was natural, CCC Development Director, Brittany Morris, did not anticipate the opportunity that was to come of it. ReRack offered to donate the massive ad-space on the side of their Sandy Boulevard building for us to use. 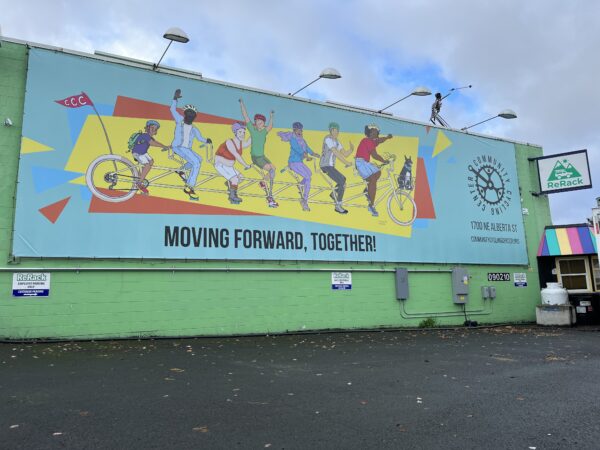 In all of CCC’s 28 years, we have never had a billboard. They’re simply too expensive. This marketing opportunity was made possible thanks to ReRack’s generosity and the support of OUTFRONT Media and Oregon Blueprint. ReRack has pledged to put up the CCC billboard throughout the year whenever there is a gap in their marketing calendar. They expect this will occur 1 – 2 times a year with 4-week intervals of ad time.

The CCC design team decided on a simple, positive message for the billboard: “Moving Forward, Together.” This message of cooperation is accompanied by an image that illustrates the diversity and vitality of our community, all the while expressing the joy that bikes bring. As an organization whose mission it is to broaden access to bicycling and its benefits, we are dedicated to moving forward alongside our Portland community. We have been reflecting on this mission as we near our 30-year anniversary. Some highlights we are particularly proud of include:

We hope the billboard inspires positive change in our community. There is much work to be done toward creating a more equitable and just society for all. This billboard represents the important role that bicycles and bicycling can play in fostering this change. Bicycling does this in many ways including allowing freedom of movement and autonomy; facilitating access to basic needs; and encouraging a healthy lifestyle. Bicycles also build community and connection; an essential ingredient for transformative change.

Each member of the design team who made our billboard possible has a deep history with CCC. Meet them below! 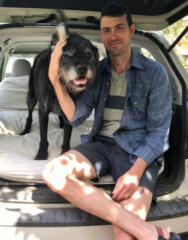 Jonathan Scarboro was the lead illustrator, and he generously donated all of his creative labor to the CCC billboard project. Jon’s roots in the bicycling community are deep and include owning the Cat 6 Cycles bike shop. During his bike shop days, he would refer customers to the CCC if they needed more affordable rates or wanted a more DIY project that CCC’s used component selection could support. He is also known to support CCC by attending events and offering business consultations. Jonathan has left the bike industry, and is now dedicated to helping people heal through his mental health counseling practice. 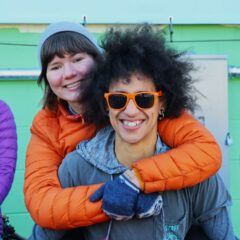 Nissy Cobb (wearing the orange sunglasses) was the project’s lead equity voice and designed the billboard’s background. Born and raised in Portland, Nissy grew up frequenting the CCC bike shop as a junior competitive bicyclist with a focus on velodrome racing. The CCC helped Nissy and many other Portland youth keep their bikes rolling for whatever their needs were. Nissy’s love and passion for bicycling grew until they were traveling the world and competing professionally, racing in as many fixed-gear crits as they could fit in between track races. All while volunteering with the CCC and eventually joining the staff team as a Retail Specialist then Inventory Specialist followed by New Inventory Coordinator, Retail Manager and now Community Programs Manager. When not buried in bikes and parts, you can find Nissy loving on their dog Keirin and showing up as much as possible for community members. 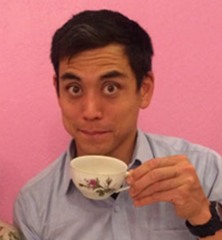 David Kurushima was the lead digital artist in colorizing the bike and riders, which was intensely detailed work due to the illustration being hand-drawn. David’s commitment for CCC’s mission is tireless, as seen by his post-midnight email updates on the design. David’s history with CCC began as the Bike Shop General Manager for over 9 years. When not working or volunteering, you can find David mountain biking, surfing, or playing ultimate frisbee. Today, he acts as a passionate board secretary and is the Director of Creative Strategy at ocV!BE.

Go check out the billboard yourself! It’s located at 2240 NE Sandy Blvd. Portland, Oregon, 97232 and will be up until mid-December. Taking photos with the billboard is highly encouraged! When you’re done, swing inside of ReRack to see what kind of sweet deals you can find to help take you on next year’s riding adventures.

Huge thank you to Jonathan Scarboro, Nissy Cobb, and David Kurushima for the creative labor and teamwork it took to complete this project. And thank you to BikePortland for coming out on a chilly day to cover the billboard celebration!

We’re continuing to move forward, are you coming with us? Consider making a donation today!