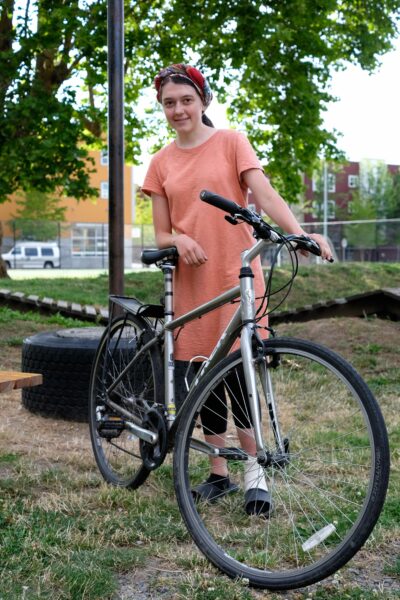 Did you know that the shop hosts an apprentice every year?

Since 2017, we’ve been able to provide this opportunity to youth from our various partner communities. The intent of this program is to provide experience and industry connections for young people who are seriously considering a career in the cycling industry — a foot in the door of an industry where women and people of color are largely left out.

Nina’s been a long time volunteer at the Community Cycling Center’s (CCC) Repair Hub in New Columbia. She’s also a graduate of CCC’s Bike Club at Cesar Chavez school! This past year, Nina turned 16 and became eligible to work in the bike shop. She jumped at the opportunity. Since January, she’s been in the shop a few days a week, working with guidance and support from our Programs Mechanic, Riley, and the rest of our expert shop team.

Having moved with her family from Siberia at age six, Nina speaks three languages and is currently learning a fourth! She keeps a pretty low profile but we think she’s awesome and want everyone to know. Nina was kind enough to answer some questions about her experience with the CCC and her knack for fixing things.

Check out the full interview below!

I’ve heard that you’ve been volunteering at the Community Cycling Center(CCC) for a REALLY long time. Is that true? When did you start? How’d you first get involved with the CCC?

Whether it is a really long time or not, everyone sees for themselves. I have been going to the Hub for about five summers, since the finish of 5th grade. I never knew about it, until one day my oldest brother told me to follow him to this bike place nearby. He didn’t say much about it, and I saw for myself. I loved it and it became a regular thing for me.

Riley’s been your go-to person at the shop, what does she have you working on?

Well first off, Riley is very awesome, and I’m thankful to have her as a teacher person. It really depends on what needs to be done and how soon, and I’m happy to do anything at all. Lately, it is putting together new bikes. Before, I “teardown” not good ones. Sometimes I fix bikes that are used, but not very often that happens. If I ever need a hand with something, or if I’m confused, I ask Riley, and she helps me or explains things to me very clearly.

Tell me about your first bike.

I got my very first bike at maybe seven years old. It was too big for me then, but eventually it fit me. I remember when I decided that I was big enough to ride it, I spent about three hours outside learning how. Now, nearly nine years later, I taught my sister to ride that same bike.

I remember Natty, one of our Coordinators at the Hub talked admiringly about your ability to figure-out and fix mechanical problems. Is there anywhere else in your daily life where you get to flex those mechanical skills? How’d you get good at it?

Well I like to fix things in general, and a lot of times I have no idea how but still do it. I prefer to fix bikes since there isn’t much else to repair. One time I forgot to take my watch out of a pocket and it broke in the laundry machine. Messing around with that was cool, and it lasted for maybe 2 more months. I also always loved to put together furniture, and repair it if it breaks.

From a mechanical point of view, it is such a simple yet complicated item. In short, they serve a great purpose to me since I commute using a bicycle. There are no age requirements of any sort to ride or fix bikes, and I love the time me and my family can spend on bikes together.

What’s the farthest you’ve ever ridden? Tell me about that ride!

The farthest I have ridden was to Gresham for an appointment I had. It was my first time travelling to the destination on my bike, and I wasn’t aware of some big hills. Enjoying the ride wasn’t my purpose, but it’s still something that ended up happening. The longest distance I rode was 63 miles. I think I went to a few stores in outer Portland and made a loop on some trail I hadn’t ridden before.

What’s next? Are there any routes or places in particular that you’re hoping to ride to this summer?

I enjoy going down and on to east bank esplanade. It’s a fairly short ride, and I like to sit on one of the benches by OMSI, while reading a book. The view is really pretty too, especially during early mornings and dark.

Do you have any siblings? Do they like to fix stuff too?

Yes, I have siblings, and it appears they like to break things more than fix them, but no worries at all I think. Breaking is the first step to fixing. If it is a fairly simple issue, then I show them and/or work with them to fix the item. Also, I won’t lie, I love it when they bring me something broken to fix, regardless if I know how or not.

Why did you want to apprentice with the CCC?

I love working with bikes. I was always a mechanic-y kind of person who liked to fix things, and CCC offers that the best to me. It is not physically very tiring work, and my brain thrives while learning all this new stuff. I just love working with bikes, whether it’s volunteering or working. It’s amazing to see people’s faces light up when you hand them a fixed bike, I wouldn’t trade it for anything.

What advice would you give to someone who is having a hard time learning how to fix a bike?

Take your time and be patient with yourself. If you make the same mistake twice, laugh about it, make a joke and keep that issue in mind next times. I get the meaning behind it when people say “it’s okay to make mistakes, just don’t make it twice”, but I don’t agree with it completely. Like I said earlier, a bike is complicated, and there is no way you won’t make the same mistake twice. For me personally, I could not remember to tighten the lock nut on the hub. Multiple times I bring Riley a wheel to double check, and she tell me lock nut is loose. I say “oops. yeah I’m dumb” and haul of to tighten it. But next time, I keep in mind to triple check if lock nut is locked. And eventually, it gets into something I don’t need to keep in mind at all and just do it. With some things, 1 or 2 mistakes isn’t enough.