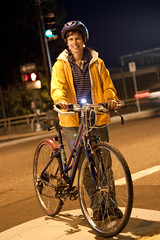 In 2011, we held 13 Get Lit events at various intersections in the Portland Metro Area, installing front and rear light sets on a total of 429 unlit cyclists.

We planned our events this year with our program partnerships in mind and with an effort to include neighborhoods in north and northeast Portland.

In September 2011, we reached 66 unlit cyclists in under two hours at the intersection of N Williams and NE Weidler. This intersection received a new cut-in bike path last year, allowing people on bikes to merge onto Williams with more space and safety. For this event, we teamed up with one of our partner agencies, Central City Concern, who owns the building on that corner. It was a great opportunity to strengthen our relationship by collaborating together on this event. We were able to provide a fun Get Lit event with some of the Create a Commuter program participants from Central City Concern.

We also held a Get Lit event at a new intersection near Ladd’s Addition, at SE 12th and Hawthorne. This was our busiest intersection, where we reached 74 unlit cyclists in less than 2 hours!

Thanks to the Portland Bureau of Transportation for being a great Get Lit partner. We look forward to lighting up more streets and bicycles in 2012!

Get Lit is a bike safety promotion program. We like to think of it as a random act of safety because we install Planet Bike front and rear lights for free on unsuspecting (and unlit) cyclists. We do not publish or promote the Get Lit schedule. It’s a surprise! With a team of volunteers, we target an event or a neighborhood at dusk and find people without bike lights.