Bike Club – A tale of learning how to ride a bike 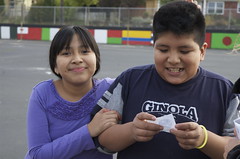 Many people remember the person who first taught them how to ride a bike. This fall, Vernon School has a brother and sister, Franky (5th grade) and Yaquelin (6th grade), who were excited to share their story about how Yaquelin learned how to ride.

Franky was previously enrolled in Bike Club last spring. He worked hard and impressed the instructors with his mechanical skills. He successfully completed the program while earning his own bike, helmet, and lock. His sister, Yaquelin, did not have a bike and did not yet know how to ride. Even though he had a bike, Franky felt disappointed that she could not join him on his two-wheeled adventures. After earning his bicycle, he said, “I hate it when she can’t ride because then she has to stay home.” With Franky’s help and assurance, Yaquelin was able to learn to ride on the bike Franky earned through Bike Club. Wanting to support his sister, Franky was persuaded to lend her his bike, “She would ask, I would say no, she’d say please, and I would say okay.” Franky would lower the seat for her so that she felt safe on her bike.

Yaquelin recalled the struggle of learning how to ride a bicycle. “When I first rode, I fell. About a month later I could stay up. I get nervous riding in front of family, but I enjoy showing them how I can ride.” Her dad was impressed and helped reinforce the lesson of wearing her helmet. Unfortunately, this past summer, Franky’s bike was stolen from outside their house. He felt bad and looked for it every day. Unable to find it, this fall he re-enrolled in Bike Club with the hope of being able to earn a new bike.

On the second day of this Bike Club, Yaquelin walked by to check on Franky. With enthusiastic encouragement from her brother, Yaquelin decided to jump in and enroll as well. Soon she was on track to earn her own bike. When asked what she would be doing if she wasn’t in Bike Club, Yaquelin said, “Maybe Hip-Hop Club, but most likely sitting at home, bored.”

After the first day of Bike Club, Franky was eager to share what he had learned from having his bike stolen. He replied, “To have it locked or not leave it in front of our apartment.” Sometimes experience is the best teacher. In addition to learning how to keep their bikes safe, both of them are looking forward to riding to some of their favorite parks and perhaps even visiting another Bike Club. “Franky told me Bike Club is fun,” noted Yaquelin. “Now I regret not signing up earlier.” Both Yaquelin and Franky are well on their way to earning their new bikes and to finally have the opportunity to enjoy riding together.