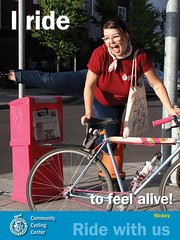 It is a bittersweet moment for us today as we say farewell to our fabulous Social Media Specialist, Nickey Robare. Over the past year, Nickey has not only brought to life many stories through our blog and social media sites, but she is also a talented filmmaker, photographer and graphic designer. We are sad to see this multi-talented lady go, but we are excited for her next adventure as she moves to St. Paul, MN.

We sat down with Nickey to get the inside scoop on her new job, bicycling in the Twin Cities, and how she is preparing for winter in Minnesota.

Where are you going? Tell us about your new position.
I’m moving to Saint Paul, MN to be the Online Communications Coordinator at the Saint Paul Neighborhood Network (SPNN). SPNN is the cable access center for the city of St. Paul, so it’s a place where anyone can, for a very low cost, learn how to use professional video equipment and produce their own television programs to be aired on local cable. I’ll be working on all manner of online communications, including their website and social media. I’m excited about being part of the media justice movement and helping community media get a strong foothold in the internet age, which will ensure this vital resource is around for the next few generations.

How has the bicycling movement changed in Portland from the time you first moved here until very recently?
Oh, wow, it’s changed SO much! I first moved here in the summer of 2002, when I was only 20-years-old, so I feel like I’ve grown into adulthood right alongside the Portland bike scene. 2002 was the first Portland BikeSummer, which eventually turned into Pedalpalooza, and it’s also the year ZooBomb got started. Ten summers later, Pedalpalooza is an institution this city couldn’t live without, and ZooBomb has a city-funded monument downtown.

I’ve always been involved in the bike community, and at one point I really felt like I knew everyone. About three years ago I had a coworker that commuted by bike daily, but wasn’t involved in the bike scene at all. That’s when I realized bicycling in Portland was no longer a fringe activity – you didn’t need to be a part of a subculture anymore to do it. You just had to ride your bike.

I think bicyclists have turned into a real political force in this city. Our needs and concerns are being heard more than ever before. However, I think we have a lot of work to do when it comes to equity for Portland cyclists. Inner Portland is relatively safe for cyclists, and I really think we need to stop getting into divisive battles about places we think are dangerous, but statistically aren’t. All of the bike/car fatalities in 2011 have taken place outside of the central city. We’ve done a great job of making inner Portland an awesome place to bike, now let’s do it for the rest of Oregon.

What do you know about bicycling in St. Paul?
Not much! The Twin Cities (Minneapolis and St. Paul) are known as one of the best places to bike in the US. In fact, Bicycling Magazine knocked us out of first place this year, naming Minneapolis the #1 bike city in the US. St. Paul is just across the river and doesn’t have quite as many bike paths, but has great infrastructure, nonetheless. I’m going to be living right next to an off-street path for the first time in my life, which I’m pretty darn excited about.

How does it differ from Portland?
I think the winter is the biggest thing! It can snow for 8 months a year, and the average temperature in January is (gulp) 21.9°F. But it doesn’t rain nearly as much, and Midwestern summers are unbelievably gorgeous. Also, they’re much better at dealing with snow than Portland, so it’s nowhere near as scary as it can be here.

What are you doing to prepare for biking in the winter in St. Paul?
Mostly stressing out. The idea of not riding daily makes me really sad, so I think I’ll just have to deal with the cold. I bought some knobby cyclocross tires and a balaclava at our bike shop, and a big stack of wool socks from Andy and Bax.

Any last thoughts or words of wisdom that you’d like to share?
I’ve been doing a personal farewell tour of my favorite food in Portland, and I’m realizing that it’s all really fatty, delicious, dairy-saturated stuff. I’m beginning to think that we only bike in this town to burn off all the calories we acquire during brunch every weekend.