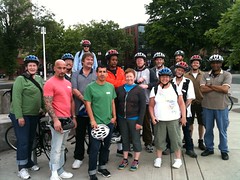 We ended our Create a Commuter season with a fantastic workshop at Central City Concern in downtown Portland. Central City Concern is a nonprofit agency serving single adults and families in the Portland metro area who are impacted by homelessness, poverty and addictions. This agency has a powerful mission: “Changing Lives, Building Communities, Creating Opportunities”, and I truly believe that this Create a Commuter workshop on June 24th did all of those things.

We had 12 adults from the Employment Access Center sign up for the workshop, and all 12 of them showed up on time. Two of the women shared with us beforehand that they had not ridden bikes in over 30 years, and that they were a little bit nervous. An older gentleman then upped them, and jokingly said he hadnâ€™t ridden in 100 years, easing their discomfort right off the bat. Another participant said that he had not been able to ride a bike at all during the last 17 years, as he had been in jail for that long.

With the group relaxed and fitted to their new bikes, we took them on a short test ride down the new bike lane on SW Stark Street to make sure they all felt comfortable and could stay upright. We went slow and steady, and everyone made the 8 block loop back to the Recovery Building, where the class was being taught. After some more indoor practice on the stationary trainers, everyone felt comfortable shifting and braking, and we headed out to the Waterfront path. Everyone navigated the downtown traffic, and we rode along the Waterfront to the Salmon Street Fountain, where we did a victory lap.

At the end of the class, we asked folks where they were most excited to ride their new bicycles, and their confidence and gratefulness beamed. Their answers ranged from being excited to ride to work, to the Esplanade, and to the I-205 bike path. A whole new world was opened up for them, and we could not have asked for a kinder more appreciative group to end the program year with. I felt like we contributed to changing their lives, building their community, and creating a new transportation and recreational opportunity.

Check out photos from this Create a Commuter workshop on our Flickr page.