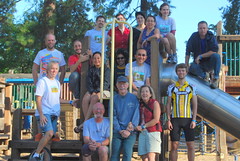 Cycle Oregon 2009 explored the “Mythical State of Jefferson,” a geographic bioregion ranging from southern Oregon to northern California (had Pearl Harbor not occurred, it would be the 51st state). Along the way we traveled the back roads between Medford and Happy Camp, Glendale and Grants Pass.

Each day our intrepid team of staff and volunteers set up a bike detailing workshop and an electronics charging station, helping keep riders’ bikes and equipment clean and charged. Our experience this year was both mythical and magical.

We brought along a top-notch, tight-knit team of two staff members and fourteen volunteers, nine of whom were returning from last year. The group bonded quickly; as our Volunteer and Outreach Coordinator, Brian, noted, “daily pre-coffee conversations really help you get familiar with each other.”

The team camped, cleaned, and charged in six different towns, dedicating more than 700 hours over the course of the event. They detailed 155 bicycles, making them look like new, and charged electronic devices for over 650 riders. We set a goal to sponsor 75 children for this year’s Holiday Bike Drive during Cycle Oregon and thanks to the generosity of the riders, we far surpassed it!

Obviously, the numbers only tell a small part of the story. The magic of the experience happened all along the way, like the Sasquatch sighting in Happy Camp or the final evening in Grants Pass, as we finished detailing the final bicycles and the Bike Gallery mechanics came over to help sponsor the last three kids for Holiday Bike Drive (thanks, guys!). There was even magic on the road, like when Collin was pedaling down along Evans Creek between Glendale and Grants Pass and noticed a baby bear peeking from behind a tree.

We shared an amazing time on the road; thanks to Cycle Oregon for inviting us along, to our amazing volunteers for their dedication, and to the riders for supporting the Community Cycling Center.