A day in the life at the Bike Repair Hub 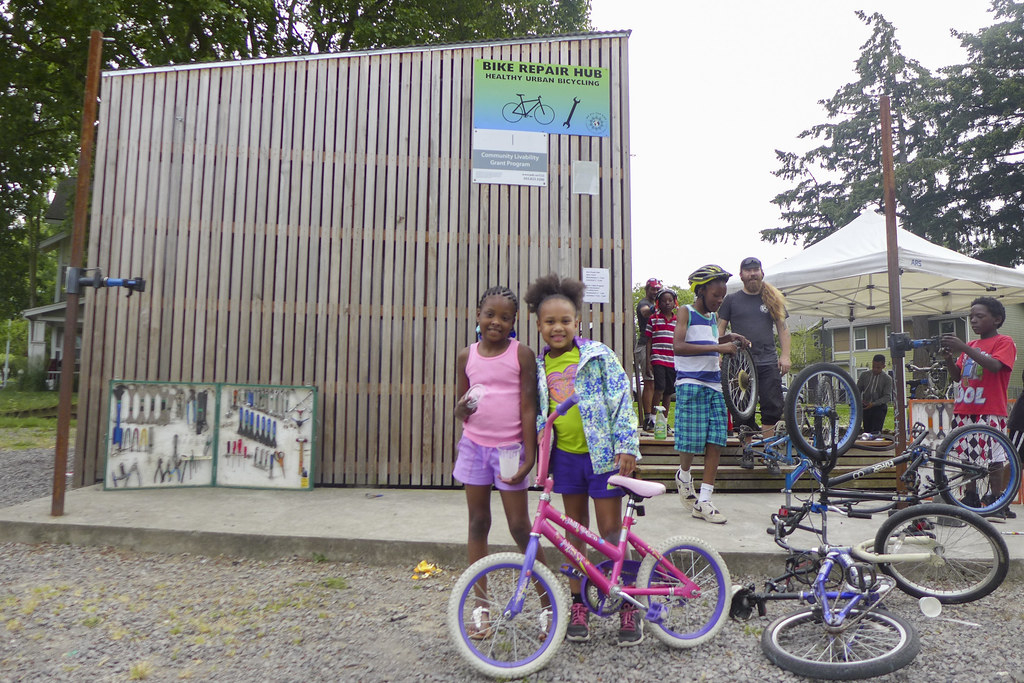 “Tim, can you come over? I can’t unscrew this part! Tim?” Royal, a third-grader, shouted out eagerly to one of our two bike mechanics, Tim and Carl, who run the New Columbia Bike Repair Hub on Wednesday and Saturday afternoons. It was an extra busy Wednesday with limited volunteer support. Tim said he gets anywhere from zero to four volunteers in one shift, and it could get hectic. While busy helping another kid adjust the new handle grips on his bike, Tim told the group of three friends he’ll help them in a minute. The three third-graders looked a bit frustrated with the uncooperative bike, but they still kept trying to turn with a big wrench in their hands. They were not the only group trying to solve bike problems on their own. Some kids simply stopped by, looked for the right tools, and started working on their own before receiving help from Tim or Carl.

Bikes are very popular in the community as a faster way to commute and, of course, for recreation. Sean, a sixth-grader, said he commutes to his school in Gresham by bike every day. Some families also go grocery shopping or go out to eat together on their bikes. But for younger kids, biking around the neighborhood with friends is what they do most with their bikes. They sometimes come to the Hub as a group to get one of their friends’ bikes repaired before heading off together. Or they come in to get some nice additions to their bikes, such as pegs for bike tricks and for friends to stand on. Bike aesthetics are highly valued here, though it can be hard. “I want to find pegs that match the color of my bike,” Royal showed me the blue pegs newly added to his bright orange bike. “But I can’t! I shouldn’t have given my friend the red ones, but it’s ok. He can have them.” 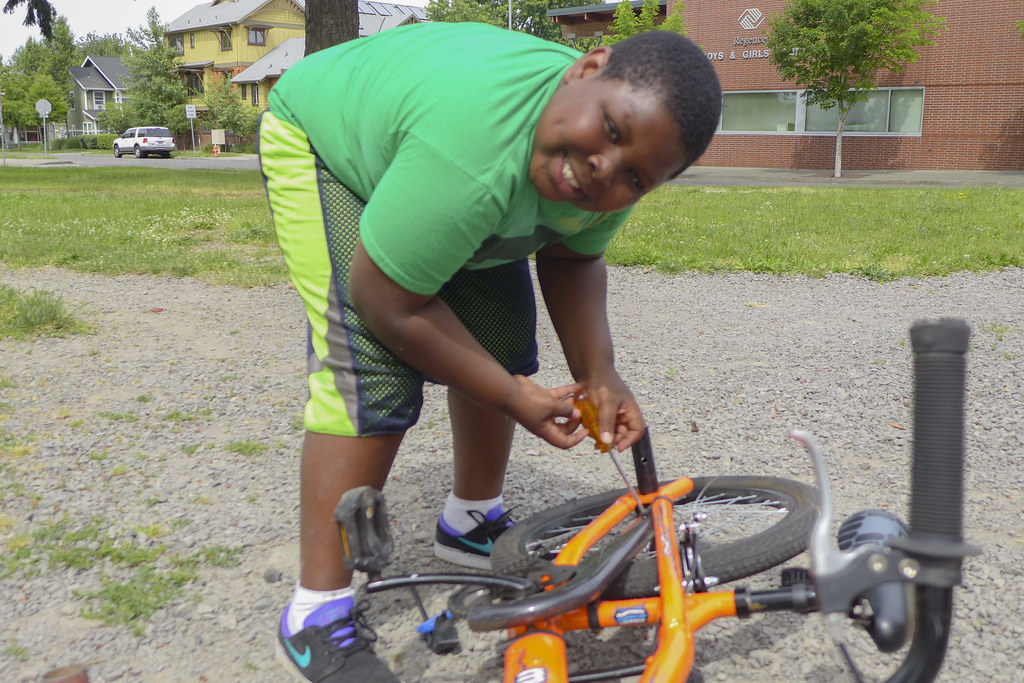 Although the Hub is small, it provides a variety of services that keep bikes safe and running, ranging from fixing a flat tire, giving out free locks and helmets, to building a new bikes from donated second-hand parts. Tim, Carl, and the volunteers also teach basic bike mechanics to kids who are interested. They have recently launched a new program call “Build a Bike” on Saturdays. It gives kids who volunteer at the Hub for twenty hours the chance to build their own bike. Many kids told me that they received their bikes right at the Hub or from the popular Holiday Bike Drive in December. For a lot of families at New Columbia, these are their only options to gain access to bikes.

However, the Hub serves as much more than merely a bike repair shop. It helps create a stronger tie within the community by offering an open and cooperative space for people to meet and help each other out. The most frequent visitors are kids from five-year olds to middle school students. “I come here almost every day [when the Hub is open],” one kid told me, “If I don’t need to fix my bike, I help my friends with their bikes.” A parent also stopped by and thanked Tim and Carl enthusiastically. “I’m so grateful that you guys are doing this for the kids! I don’t know where we’d go to fix her bike if you weren’t here, and God knows what the kids would be doing after school.”

The success of the Bike Repair Hub is largely due to Tim and Carl’s hard work. They make the Hub a very accessible and safe place for everyone. They know the kids by their names and prevent bullying from happening. They explain the mechanics patiently both for kids and adults, while encouraging people to stop by more often. It is their hard work that keeps the Hub running and makes it thrive in the community.

We have an Indiegogo campaign for the Hub so that Tim and Carl can double their working hours and serve more community members. Head over to the campaign page and support Tim and Carl in doing more awesome work! 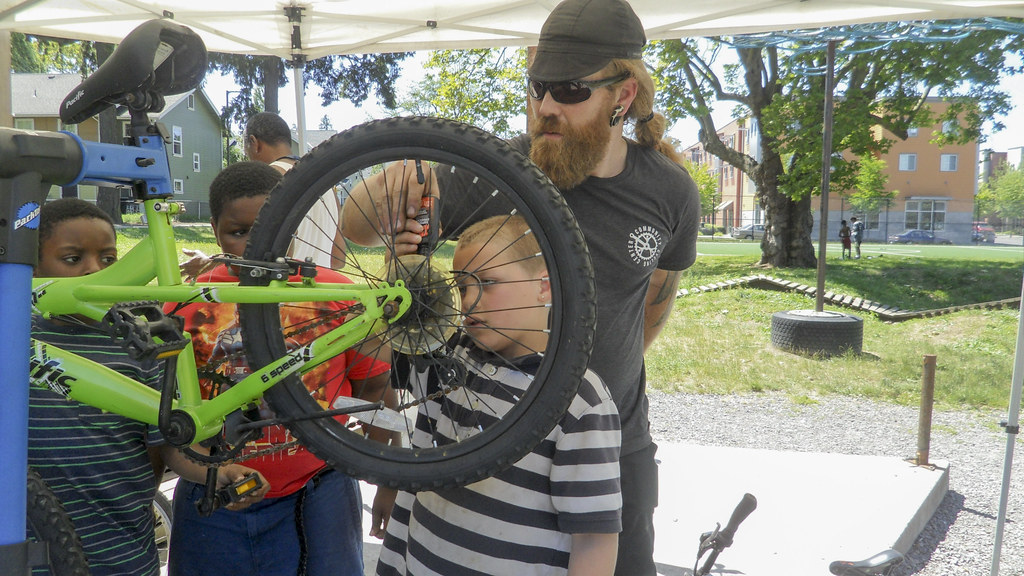 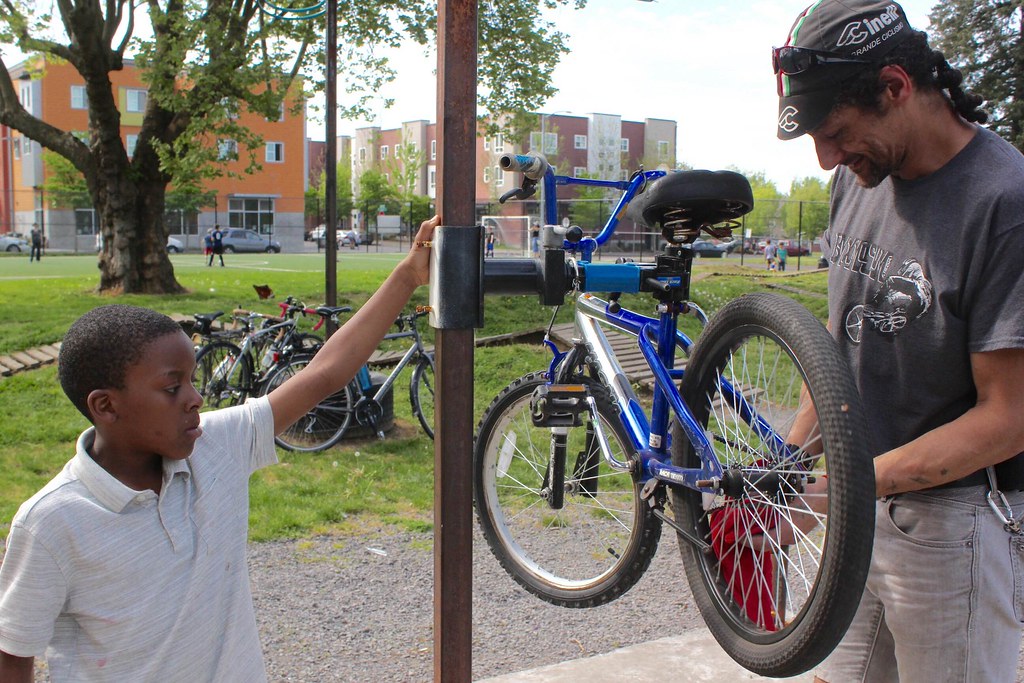