Getting to know: David Kuch 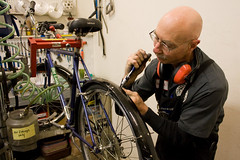 Mechanic David Kuch is the longest-serving member of the Community Cycling Center staff. Over the years, he has taught, trained, and mentored new mechanics and program participants while repairing more bikes than you can count.

Known for his willingness to help solve tough problems, David’s expertise and attention to detail is renowned among mechanics and customers alike. His coworkers value his deep investment in the organization, while customers and program participants appreciate his alacrity and patience when explaining mechanical systems.

Employee at the Community Cycling Center since: November 2002

Why do you work here?
It’s near my house. Actually, I like the Center’s mission of getting people on bikes, and I like the satisfaction of renewing and reusing old bikes.

What is your favorite Community Cycling Center program?
It’s a toss-up between Bike Club and Create a Commuter. Maybe Create a Commuter, because it gives older folks a tool for getting out of poverty that has real dignity and long-range benefits.

What do you do when you’re not at the bike shop?
I read a lot, listen to music (jazz, blues, classical, fado), ride up and down hills — and row. I have a racing single and row it on the Multnomah Channel (near Sauvie Island). I also enjoy hanging out with friends and sipping microbrews while we solve the world’s problems.

Any advice for hopeful bike mechanics or bike mechanics who are just starting out?
Become a craftsman. Attend to the details, because it is a job of details. Buy good tools and only the ones you are prepared to use. Learn to think outside the box.

Since you’re an elder statesman around here, I bet you have some tales to tell. What’s your favorite story?
There are a few. Once, when I was at our early outpost shop in a Vancouver mall, a woman came into the shop with a slightly messed-up hybrid bike. I went through some repairs on it while she watched and asked questions about the bike and about the Center. After no more than a half hour I had fixed her bike and given her the modest bill. She wrote a check and handed it to me, with thanks and a smile, said something like “keep up the good work,” and left. I started to ask her to stay so I could verify the info on her check, but too late. The check was for $3,000. It did not bounce.