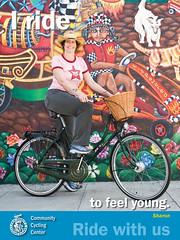 An active cyclist and community booster, Sharon Senter openedÂ Russell Street Bar-B-QueÂ with her partner Diane Santucci in 2004. Following Sharon and Diane’s lead, Russell Street staff have become great advocates for us, holding BBQ fundraisers, a bike collection, sponsoring scholarships for Bike Camp, and, this year, making the hundreds of Holiday Bike Drive volunteers so happy by providing incredible food on the big day. Read on to find out why Sharon believes so strongly in the power of giving.

On the importance of neighbors helping neighbors:
Growing up, my family was extremely poor, and so I was personally the recipient of a lot of generosity. Our home burned to the ground when I was in 6th grade, and the community was extremely generous. This idea that the community helps each other was something that was instilled in me at a young age.This really brings my life full circle, from being a recipient of charity to finally being able to give some myself. It helps me feel successful in a way that’s not really measurable in dollars.

On why bikes are important:
A bike is mobility and freedom. Some of my best memories growing up were riding all over town. It felt like I had so much independence with my own bike, I was on it all the time.

On how she became involved with the Community Cycling Center:
Shortly after moving to the Alberta neighborhood, I became really impressed with the work the Community Cycling Center was doing. My young neighbor was telling me about how she had gone to this big party and gotten a bike, which turned out to be the Holiday Bike Drive. We decided the Holiday Bike Drive would be a good time for Russell St. Bar-B-Que to pair up with the Community Cycling Center. Youth are the future of our city, and it’s really important to instill this passion for bikes in them at a young age and teach them how to be responsible cyclists.We’ve collected bikes, we donated some food to the Holiday Bike Drive last year. This year we’re donating all the volunteer food. Next year we’re really excited that we get to sponsor seven kids for the Bike Camp.

On what’s so great about the Holiday Bike Drive:
The minute I got there I thought, this is a really cool event. When I pulled up there were kids outside practicing with their new bikes. There was just so much energy and positivity, it was beautiful.I really appreciate that it’s a bike-specific event. I have a real problem with all the plastic junk in the world. A bike is something real and tangible that will last, it can be passed down. If you can maintain it, it can last forever.