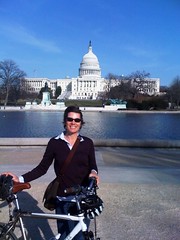 Bikes make people happy. That’s the word on “the hill” after more than 700 bicycling advocates descended on Capitol Hill in Washington, DC, last week to share stories and encourage legislators to support bicycle legislation. We advocated on behalf of the league and told local stories illustrating the myriad ways bikes change lives and it made our legislators smile.

I was certainly smiling. I was so proud to represent the Community Cycling Center, both as a summit panelist and Executive Director. Wednesday was my first day on the job and it was also the day that I presented with Jay Ferm from Planet Bike, Allison Mannos from the City of Lights Project in Los Angeles, and Anthony Taylor of the Major Taylor Club in Minneapolis. We spoke about broadening the bicycling movement and discussed projects that are making bicycling more accessible to communities of color. 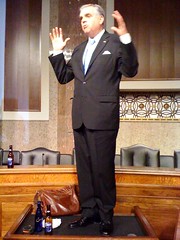 On Thursday we spent the day on the hill. I participated on a panel with other Portlanders to explain why we’re a Platinum city and how we did it. I spoke about the Community Cycling Center’s work engaging the community, connecting people with bicycles, and told a Create a Commuter story.

Later that evening during the closing celebration, Secretary of Transportation Ray LaHood spoke. Actually, he jumped up on a table covered with beer bottles, raised his hands in the air and enthusiastically proclaimed that bicycles have a place in America’s transportation plan because they help create livable communities.

All in all the 10th annual National Bike Summit was a complete success. I returned to Portland energized and proud that our work is resonating so strongly across the country.