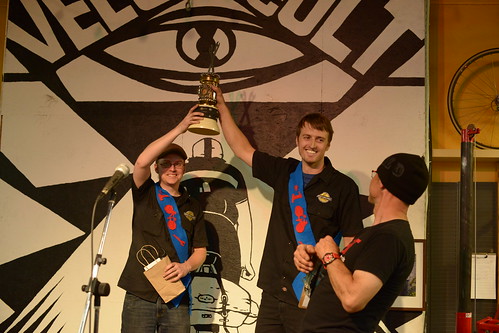 Event raises over $11,000 for the Community Cycling Center

June 16, 2014 – Portland, Ore. – Two mechanics from Bike Gallery—Brian Link and Sterling Hill—took home the trophy at the 2014 Bike Mechanic Challenge, a benefit for the Community Cycling Center. Mechanics from around the city competed in a series of events in front of a packed audience at Velo Cult. A few secret twists surprised participating mechanics during the competition.

“The blindfolded tire change kind of came out of left field. I have never tried to do that before. I have never worked with two people on the same bike,” noted Brian Link after winning the competition. Their speedy skills paid off, as they repaired the tire without eye sight at a winning time of 2 minutes and 22 seconds.

The winning pair attributed their success to good communication and training. “Bike Gallery expects the best out of us and so we get used to doing that,” added Sterling Hill. “They give us every opportunity to do better and to educate ourselves.”

“We knew right away when we heard about the Challenge that it was an opportunity for highlighting the level of service that we strive to deliver,” said Corey Stayton, a spokesperson for Bike Gallery. “Sterling has an eye for detail that is second to none and can work on any bike in any condition. You can never give that guy too much work. Brian is a guy who has huge attention to detail and he also does bike fitting. They already work together as a team at our new Clackamas store. It was a perfect pairing for the competition.”

During the final round of the competition, mechanics put together “mystery objects” that were hiding underneath their work stations during the entire competition—ten bikes destined for deserving children through the Community Cycling Center’s programs. Overall, the Bike Mechanic Challenge raised over $11,000, allowing the Cycling Center to provide more people access to bicycles during its 20th anniversary year.

About the Community Cycling Center
The Community Cycling Center is a nonprofit organization founded in 1994 that helps people access their community by bicycle. We partner with communities on neighborhood-based projects and programs. We believe that all Portlanders, regardless of their income, education, or ethnic background, should have the opportunity to choose healthy, active transportation.

About Bike Gallery
Bike Gallery was founded in 1974 with the mission of getting more Portlanders on bikes, and doing it with the best service in town. Forty years later, we have grown to six neighborhood stores while remaining a family-owned business with deep roots in the community. We are dedicated to connecting Portlanders with bicycles for a healthier and inspired life – two wheels style! Whether it is family rides, commuting to work by bike, racing bikes, or getting out to the mountain on two wheels, Bike Gallery is your Bicycle Store.

###
More photos from the event can be found here.