Ten years of Create a Commuter

Part one of two

One of the early successes- and disappointments- of the Community Cycling Center was our Yellow Bike Program. We’d fix up bikes, paint them yellow, and leave them around the city for anyone to use. While the idea was very popular and received a lot of media attention, the reality of maintaining enough bikes to blanket the city proved to be unsustainable. Most bikes were stolen, lost, or damaged very quickly.

Ayleen Crotty, currently in charge of communications for Good Sport Promotion, was our Communications Director in 2001. “We really liked the idea that the Yellow Bikes were a way to give people bikes,” noted Ayleen, “But we didn’t like that it wasn’t a way to get people a bike when they really needed it to be available, in good condition.” The Community Cycling Center was already doing work to increase access to cycling for youth, and soon Ayleen and then Executive Director Daniel Bohn found themselves hearing from community members about transit issues affecting low-income adults. “We began to recognize that there were a significant portion of low-income people that were relying on taxis to get around because the bus wasn’t serving them,” stated Ayleen. They soon heard about the Job Access and Reverse Commute (JARC) federal funding and began to build the Create a Commuter program.

JARC funding addresses “the unique transportation challenges faced by low-income persons seeking to obtain and maintain employment.” Many entry-level jobs are located in areas not well-served by transit, and JARC funding helps close these gaps. Nearly all JARC programs are motor vehicle related, funding projects like bus line expansion and paratransit vehicles. Create a Commuter was the first bike program in the nation to receive JARC funding, and continues to be one of only a few. “We just went for it on a whim,” Ayleen said. “It was just a drop in the bucket kind of money for them, but huge for us.”

As the program began its first year, Beth Hamon was hired as a shop mechanic and lead Create a Commuter instructor. She was charged with helping to expand and revamp the curriculum. “Beth was instrumental in creating the curriculum in the early days,” Ayleen said. “The training was crucial and we wanted to make sure we did it right.”

“At that point the shop was always closed on Mondays for the purpose of having the Create a Commuter class,” Beth, now a co-owner and lead buyer at City Bikes Worker’s Co-operative, explained. “We’d have a written portion, and then make the participants adjust their brakes and do some maintenance, and then we’d go out on a ride. That whole thing would take 5 hours.” Along with their bike, participants would receive a few tools, inexpensive rain gear, bucket panniers, a lock, and a helmet. “The whole point is that these bikes were designed to be daily transport, so we needed to make them as reliable as possible.” 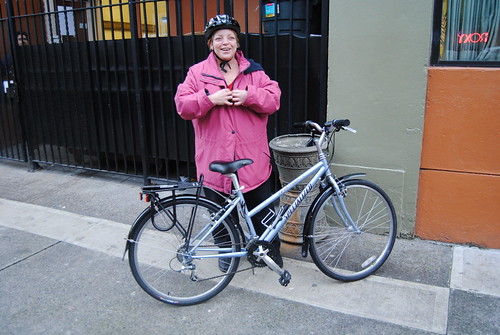 Ayleen and Beth both have particularly fond memories of working with Dignity Village, the first off-site community partner of Create a Commuter. Dignity Village is an intentional community of homeless individuals, then located near the Portland Airport. A few years after leaving the Community Cycling Center, Beth was shopping at the downtown Whole Foods when she ran into a man that remembered her from the Create a Commuter workshop he participated in at Dignity Village. “He said, ‘You gave me my first adult bike.’ I asked if he was still homeless and he said he had moved into Section 8 housing and was working as a construction apprentice. He’d built a special bamboo basket for the back of his bike to carry his construction tools. His bike had really given him the ability to get a job and move into a permanent home.”

Brittany Berkley was an Americorps member with LegalAid in 2004 and received a Create a Commuter bicycle. “I remember clearly what a diverse group of people it was at the training,” she said. “There were a lot of homeless people there and I thought that was so great.” Brittany really enjoyed her Create a Commuter workshop and learned a lot. At the end of the day, she and a fellow Americorps member “realized we had to ride our bikes home, and I was pretty terrified. It was probably my first real street ride and we were both basket cases after having our hands held all day. We had to cross Sandy and didn’t know what to do. It felt like a real sense of accomplishment when I made it home.” Brittany became a regular commuter and rode her Create a Commuter bike to work every day for several years, until she upgraded to a new bike. Today Brittany is a lawyer at St. Andrew Legal Clinic, down the street from our shop. She plans on donating her old Create a Commuter bike back to the Community Cycling Center this summer.

Over the ten years of Create a Commuter, a lot has changed, but the mission has always stayed the same – providing healthy, safe, reliable transportation to people in need. Check back soon for part two to learn about how Create a Commuter has continued to grow and change to serve our community in the best way possible.