Dave has been volunteering with us since the last millennium. He started out cleaning bikes, decided to try his hand at repair, and soon became a fixture at Tuesday Drop-In Nights. Over the years, Dave refurbished approximately 9 trillion Holiday Bike Drive bicycles, and along the way he became one of our most talented and dedicated volunteer mechanics.

Dave had to leave town for the past few years, and just recently returned to the Rose City. He has already joined us at several events and drop-in nights, and we’re thrilled to be working with him again. 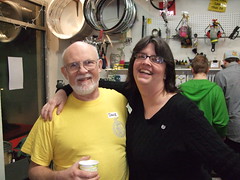 1. How long have you been volunteering at the Community Cycling Center?

I first volunteered for the CCC back in 1999. The Portland Wheelmen were doing bike cleanings on Friday nights for a couple of months before the Holiday Bike Drive.

I volunteered again for the cleaning the next year. I started coming in on Tuesdays for the volunteer nights. Because my skills weren’t so good, I was doing mostly teardowns. I learned a lot about how bikes came apart and how to use some of the tools.

I had bought my first bike as an adult in 1998, and I got tired of having to take the bike into a shop every time I needed the shifting or braking adjusted. I tried doing it myself, but soon discovered that I was taking a machine that didn’t do quite what I wanted it to and turning it into something that didn’t work at all. I signed up for the 8 week mechanic’s class and learned about 10 times what I expected to. My son got me a basic set of tools for Father’s Day, and I was hooked.

3. Why do you volunteer here?

There is absolutely nothing like seeing that sea of bicycles at Holiday Bike Drive and that bunch of kids with eyes like saucers picking out their first bikes. Volunteer? Nope. That is pay day, and big time.

4. What is your favorite thing to do as a volunteer?

Teaching the new volunteers what we do. I just love it when I see the light come on when someone starts to truly understand something and begins to enjoy it.

5. Tell us about your dream bike.

I think I have them both. I have a Cannondale R600 road bike, and a decent Novara touring bike. I think I will get a Serotta decal for the Novara, though.

6. What do you like to do when you’re not here?

I have a list of books I want to read, and I am well into it.

7. What would your bio-pic be called? Who would play you?

Unfortunately, “Fat Man on a Bicycle” has been taken, but that would have to be it. Maybe the movie company could buy the rights. Well, a woman once said I looked like Robert Redford. But she seemed confused. I think she meant Bob Newhart.