Posted by Momoko Saunders on September 7, 2010 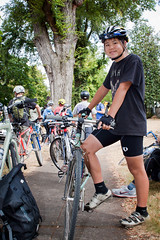 For our Youth Programs team, Bike Camp just wouldn’t be Bike Camp without Emerson. As a camper, he has been both amazing with the other kids and extremely helpful as a route leader, often providing valuable input to our instructors. This year, Emerson returned as both a camper and as a volunteer assistant for two sessions with the Coasters.

How many years have you participated in our Bike Camp? What keeps you coming back?
I have participated in Bike Camp for two years already and the thing that keeps me coming back is how I can have a lot of fun riding a bike with other people my age and exploring Portland on a bike.

How was your experience working with the younger campers? Do you have any fun stories to share?
I had a great experience with the younger campers. They all were great riders and it was fun to play games with them. I remember when I taught tube patching to one group that they were listening really well for 6-8 year-olds and they were able to do the patching mostly by themselves without any real help. That was something that really amazed me.

What is your dream bike?
My dream bike would start out as an all-chrome fixed gear frame and I’ll steadily build it up with bullhorn handlebars and an all white wheel and tire set until it turns in to a totally tricked out street bike.

What do you do when you’re not enjoying Bike Camp as a camper or volunteer?
I ride and race my bike even more when I’m not at Bike Camp. Really, riding and racing is probably about 77% of what I do with the other 23% being sleeping, eating, going to school, and listening to music.

What’s your favorite thing about Bike Camp?
The thing that I like the most about Bike Camp is how cool it is. We would be riding with the big group of Coasters and people walking on the side walk would just stop and count how many of them were riding by and think how cool it is for thirteen 7 year-olds to ride past them on the streets.

What would the title of your biopic be? Who would play you?
I think that it’s a little early thinking about a biopic for me, but if I did have a biopic it would be called: “Sleeping, Eating, Riding: A Story about Emerson Webb.” Hmm, I’m not sure who would play me. Maybe Will Ferrell, he’s a funny guy.