What’s next for ABC and bike parking? 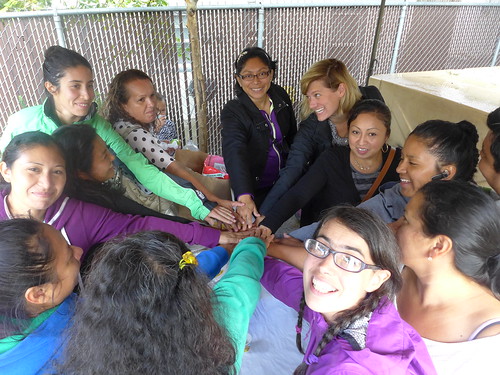 By Melinda Musser, Communications & Marketing Manager This September, one of Andando en Bicicletas en Cully’s (ABC) dreams finally came true. Safe bike storage became a reality at Clara Vista Townhomes, an affordable housing building in NE Portland where several members of ABC live. For the first time ever, residents have a safe place to store their bikes near their homes without violating their rental agreements. ABC’s advocacy efforts also led to the incorporation of lockable bike storage into the design of the new Vista de Rosas building. You can read all about the bike storage inaugural day over on Michael Anderson’s recent BikePortland blog. 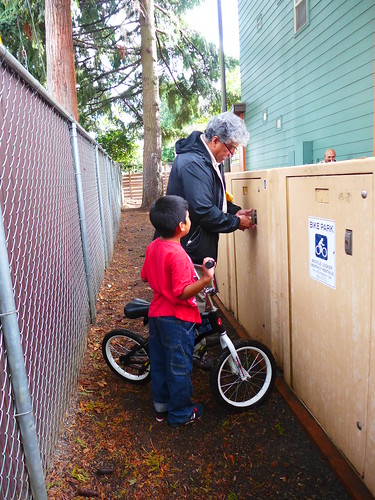 The conversation began in 2011 when residents, Community Cycling Center staff, and property management at Hacienda CDC conducted an audit of their housing site to assess the existing amenities that promote or inhibit healthy eating and active living. These assessments contributed to a set of recommendations and policy changes to improve environmental conditions for people living in affordable housing units.

As a result of the PhotoVoice project and audit, the Hacienda group prioritized the need for bike storage. Thanks to a donation of bike lockers in 2014 from the City, the dream was starting to become a reality. Hacienda CDC’s number one mission is to provide housing. Because they were juggling a lot of priorities, side projects like bike parking did not rise to the top of the list. However, in 2015, ABC was able to remind leaders that the bike parking issue wasn’t resolved yet.

With Hacienda CDC’s new asset manager, Meg Guerra, fully on board and able to prioritize supporting access to bicycling and safe storage, members of ABC are seizing the moment.

“We’re working actively to get the next spot that has space. The next building that has an easy fix would be Jardines, which is located on 60th and Killingsworth,” noted Lale. “ABC identified a location where they can put a bike corral with racks or lockable hooks.”

The process may take some time. The location where the bike corral can be located is a car parking spot outside, which means the corral would require roof. Amenities like bike storage must also match the look and feel of Hacienda’s buildings. ABC and Lale will work on finding a funding solution to make this dream a reality.

ABC would also like the Mariposas building to have safe storage solutions, however, there is not a lot of extra space outside. The city code requires a certain number of car spaces, and they currently do not have an extra space.

Meg believes there may be a solution, though. “We can make a case to the City” she said. “Especially if we can show that we aren’t using all of the spaces.”

Stay tuned, we will be covering ABC’s future bike storage efforts on our blog.