Home » Blog » Alberta Main Street helps us get a facelift

Alberta Main Street helps us get a facelift

The Alberta Main Street project is a new non-profit organization working to balance development and progress on Alberta St., while at the same time maintaining the unique character of the neighborhood. The project is implementing a variety of neighborhood improvements, one of the first of which is giving a facelift to the building our bike shop is located in, Maggie Gibson Plaza.

â€œThe Main Street program really has its roots in small town America,â€ says Alberta Main Street Executive Director Sara Wittenberg. â€œIt began as traditional main streets were losing themselves to strip malls,â€ and soon urban areas began to utilize the same principles to help grow their business districts. â€œIf you engage the people that live and shop there, they do have a stake, they want to be involved.â€

The national Main Street program focuses on four points â€œthat enable communities to revitalize downtown and neighborhood business districts by leveraging local assets.â€ Committees form for each point- design, promotion, business development, and organization. In Portland, the city chose to add sustainability as a fifth point, integrating it into each committee. Since itâ€™s founding as a non-profit last fall, the Alberta Main Street project has held numerous community forums to decide on the direction the organization will take.

One of the first projects of the design committee was a small matching grant program for sustainable facade improvements. â€œWe didnâ€™t know if we would get any applications,â€ Sara noted â€œand we got seven times more applications than we had funding for!â€ Maggie Gibson Plaza, and the Cowley Building at 28th and Alberta, were chosen as two of the buildings that would have the most positive impact on the look and feel of the street.

Our Deputy Director, Anne Lee, is serving on the board of Alberta Main Street as Board Secretary & Organization Committee Co-Chair. â€œOne of the things I really like about the project is that itâ€™s really focused on stabilizing the cost of the neighborhood and keeping residential spaces availableâ€ she says. Alberta Main St has made a positive statement by choosing Maggie Gibson Plaza, a non-profit owned building with affordable housing on the second floor. 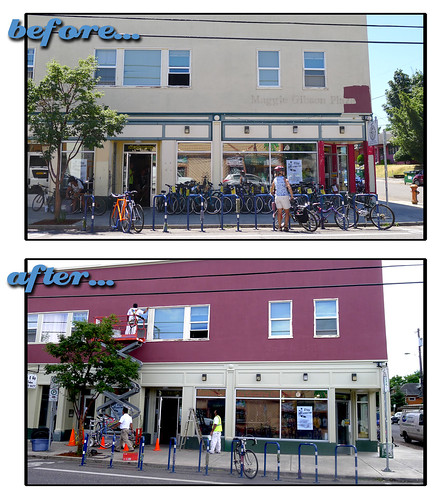 Maggie Gibson Plaza, originally built in 1908, was renovated by the not-for-profit community developer Franciscan Enterprises in 2000 and named after community activist and organizer Maggie Gibson. The Community Cycling Center moved to the building in 2000, and expanded last fall. Sine 2009 it has been managed by the Portland Community Reinvestment Initiative.

â€œMaggie Gibson Plaza clearly has such a strong presence on the street, itâ€™s been remarkable to see what the transformation of one building can really do,â€ noted Sara Wittenberg. The improvements happening are small but have a big visual impact. The building received a fresh coat of paint in a new color, the â€œMaggie Gibson Plazaâ€ sign is being repositioned to distinguish it from the storefronts, and some new lighting will be installed. There are plans for additional improvements, such as new decorative elements on the faÃ§ade, if funding becomes available. It is expected that Alberta east of 15th Ave. will be added to the urban renewal district this fall, allowing for new funding sources.

Throughout this summer, Alberta Main Street will continue to work to improve the look and feel of our neighborhood. We look forward to seeing the ideas that come out of this community project. If youâ€™d like to get involved, consider volunteering for one of their committees or the upcoming Alberta St. Fair on August 13th.