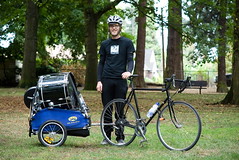 Last week, the Community Cycling Center staff held a very bittersweet pizza party. We were gathered to say farewell to our Production Manager, Benjamin Jaspers. Over the past 6 years, Benjamin has filled a variety of roles at the Community Cycling Center, and he’s always done a stellar job. We’re sad to see him go, but very excited for his upcoming adventure-solo hiking the entirety of the Pacific Crest Trail (PCT), from Southern California to Canada.

Benjamin first joined the Community Cycling Center in 2005 as a mechanic. After a few years of being a mechanical whiz, he became the new parts buyer. Then, in 2009, Benjamin moved up to Production Manager. As Production Manager, he oversaw the building of all of the bikes for our Holiday Bike Drive, Create a Commuter Program, Bike Clubs, and refurbished bikes to sell in the shop. Benjamin leaves behind coworkers with the utmost respect for him. Gram Shipley, a staff mechanic and Holiday Bike Drive coordinator, says, “Benjamin is extremely organized, and he was instrumental in getting the mechanic’s workbenches up to a higher standard.” He made sure all of the benches were clean and organized, and had all the same tools available on each bench. Mychal Tetteh, Shop Director, notes that Benjamin did an incredible job of smoothing out the pinch points in our annual production schedule. He also says that Benjamin “has the quickest wit of anyone I’ve worked with. And he’s good at everything.” Our Executive Director Alison Graves adds “we are so excited for Benjamin and his big adventure, even though we will miss his presence. He’s been such a driving force behind all of the bikes we have built for such a long time.”

Benjamin’s travels along the PCT will take him over 2,600 miles and through 25 national forests over the span of 5 months. We’ll be following his progress with a map of the PCT that we’ve taped up in the office. Benjamin, you’ve been an extraordinary member of the Community Cycling Center’s dedicated staff. We hope you have a truly incredible journey this year!