On the evening of February 10th, friends, staff members, and volunteers gathered at the bike shop to celebrate the Community Cycling Center’s amazing volunteer community at our annual Volunteer Appreciation Night and Golden Bike Awards.

We came together to celebrate the successes of our volunteer program over the past year: 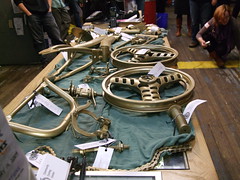 It was a wonderful evening of camaraderie, good food, and laughter that concluded with our one-of-a-kind awards ceremony: The Golden Bike Awards.

The Golden Bike Awards are created from parts of a kids’ bike. Stripped down and given the Midas touch, each part symbolizes the important contribution each volunteer makes to the whole of the Community Cycling Center. Everyone was honored with a piece of the bike, and those volunteers that made particularly outstanding contributions received the biggest parts, including the Golden Hub, Golden Wheels, and Golden Fork. 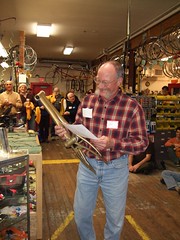 The Golden Bike Frame was awarded to Dan Allen, our 2008 Volunteer of the Year. Dan began volunteering at the beginning of last year. During 2008 he donated 144 hours supporting nearly every aspect of the organization. He detailed bicycles as part of our crew during Cycle Oregon, helped facilitate many volunteer groups, participated in Holiday Bike Drive, and is a regular at Tuesday drop-in nights. His easygoing demeanor and encyclopedic bike knowledge have made him an invaluable member of our volunteer team.

We are looking forward to another year of supporting programs and building community.

To see more photos from the evening, visit our Flickr page.