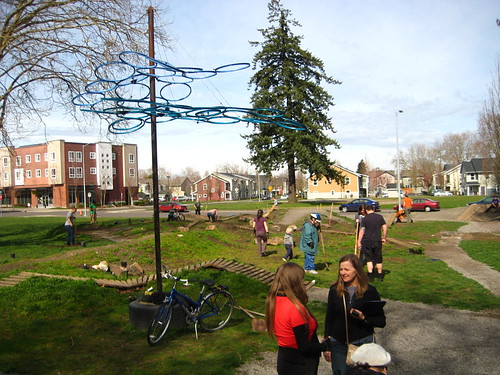 Close to 25 volunteers gathered on March 15th in New Columbia to spruce up the Bike Skills Park.  Volunteers and staff from We All Can Ride, The Community Cycling Center, Village Gardens, Northwest Trail Alliance, and East Multnomah Soil and Water Conservation District (who provided the grant to cover the cost of the trees and other supplies), mingled and worked alongside the park visitors. It was a beautiful day to be outside and work together.

The Bike Hub and Skills Park is a gathering place where New Columbia residents receive help with repairing their bicycles while having a safe space to ride their bikes. It is the brainchild of We All Can Ride, a group of area residents that runs the facility with help from its community partners.

We All Can Ride is a small group with big plans. The group wants more help from the community to bring the plans to life, and the service day was one way to get more people involved while also making improvements to the Skills Park.

Although the event kicked off at noon, several volunteers arrived early. The Repair Hub was already busy as residents huddled around the building, waiting for bike repairs. The volunteers worked hard to plant native shrubs and trees and pull weeds.

But the day wasn’t only about work.  It was also about community.  Residents and volunteers all shared a camaraderie centered around biking, the neighborhood, and the Hub. Linda, We All Can Ride member, earned this bike through the Create a Commuter program

Linda, a member of We All Can Ride, received her bike from the Community Cycling Center three years ago as part of the Create a Commuter program.  The bicycle gave her freedom to get around the city.  I first saw Linda as she finished repairing the kickstand on her bike, a skill she learned from the Community Cycling Center.  After her bike was ready to roll, Linda went to work on pulling weeds in the park.

Tyrone was getting his bike tuned up after 6 months in storage.  He and his son use the Skills Park regularly during spring and summer.  Tyrone is excited to use the park again and said he will be back to get his son’s bike ready for the season.

I met a father who brought his young son to the park.  He had just discovered the Skills Park a few days earlier, and thought it a perfect place for his son to have adventures on his bike. Another young family from the neighborhood was there with their son.  Although he was still just learning to walk, they love what the park brings to the community.

It is amazing how much work the volunteers accomplished.  The plants were all in the ground and the area weeded by 2 p.m.  The trees will create a barrier with the adjacent soccer field, and the shrubs will help prevent erosion along the bike trails and berms. Thanks to all of the volunteers who gave their time to freshen up this great spot in the community. 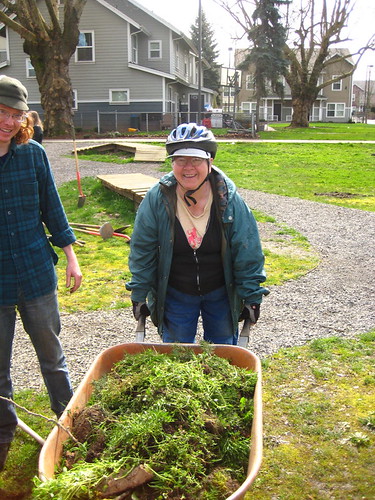 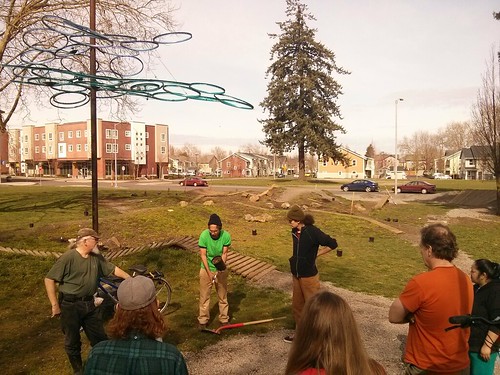 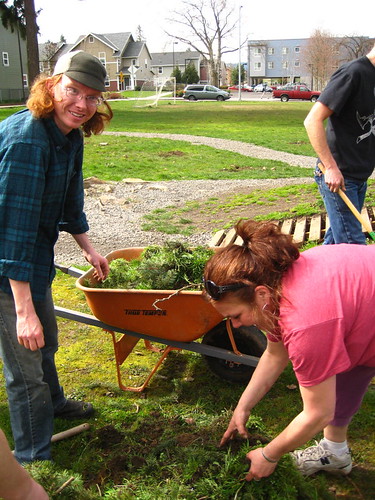