Posted by Momoko Saunders on September 23, 2010 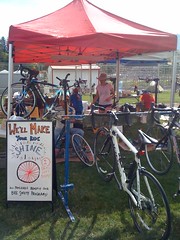 Cycle Oregon is all about connecting people and supporting communities. Their work is similar to our work in north and northeast Portland, but with a focus on rural communities, and on a statewide scale. That’s why we are so proud to partner with Cycle Oregon, which (fun fact!) also provided the first grant to launch the Community Cycling Center in the mid-1990s.

For nine years, Community Cycling Center staff and volunteers have added our unique flair to the event while raising funds for our programs in the process. This year we continued to detail bikes and charge electronics, but with a new twist. Stalwart volunteers John Beaston and Susan Hayden connected us to super-engineer Tom Ullmann and his portable wind and solar-powered generator. Our green setup was a huge success and we charged more devices than ever before this year!

Thanks to everyone who stopped by the Community Cycling Center tent along the way. Your support makes a huge difference and we are so grateful for it. Ride safe and I’ll see you on the road.