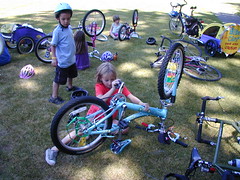 Lavender lemonade was Tatianna’s favorite part of Bike Camp. For Sean it was everything. For Ava it was riding 21 miles – her longest ride ever.

During Cycle Oregon’s Weekend Ride, the Community Cycling Center offered a version of our Bike Camp for kids ages 6 â€“ 12. Each day, we created a spectacular experience for the kids based on their skills and interests, which typically included games, bikes, and exploring the town and surrounding areas of Monmouth, Oregon.

The youngest kids, ages 6 â€“ 8, rode about two miles from the campus of Western Oregon University to downtown Monmouth, visiting parks, playing in fountains, and practicing their bicycle skills. During Saturday’s adventure, the kids created a “gear machine” with their bicycles. With bikes upside down on the grass, the rear wheel of one bike touched the front wheel of another. Cranking the pedals caused both wheels to turn. Adding bikes to the line in different configurations provided hours of entertainment and a great opportunity to discuss physics â€“ with 6-year-olds!

The middle group, a mixture of kids ages 8 â€“ 10, took a longer ride. Sunday’s ride covered a total of 9.4 miles, including a visit to lovely Helmick State Park. The group pedaled happily up and down the rolling hills from Monmouth along Highway 99, which was a lot more enjoyable than it sounds. The group remained in single file order, shouting “car back!” as they cruised along.

The oldest kids, ages 10 â€“ 12, rode 21 miles on Sunday following the same routes that the adults did, respectfully shouting “passing!” and “you can do it!” as they cranked past some tired riders going up steep hills. The group was applauded by the Cycle Oregon staff as they rode smiling into camp at the end of the day.

The highlight was the Bike Parade from camp to the main stage on Saturday Night. We gathered with the parents and rode into town pulling up in front of the stage with ease and grace to thundering applause from the audience of about 500 Cycle Oregon riders. Jonathan Nicholas introduced the kids as the future of bicycling and stood on stage beaming with pride.

Bike Camp on the Cycle Oregon Weekend Ride was everything you could hope for. It was a weekend full of meeting new friends while exploring a beautiful part of the state by bicycle.

For more photos, check out our Flickr page and BikePortland’s article about the ride.

Photo above by Dave McQuery