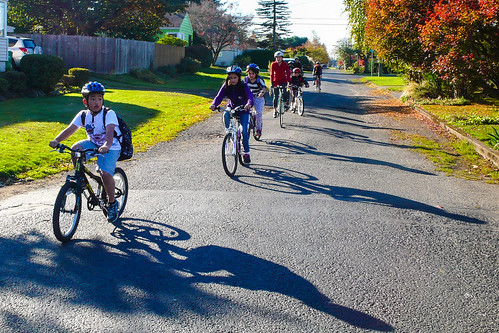 Harvey Scott’s Bike Club has come to an end and our graduates have earned their bikes. Before they went home, we asked them what they learned during their six weeks of Bike Club.

Here are some of their answers:

“Learned how to check the bike.” (Ben and Josue)

“How to pump a wheel and fix it if it has a hole.” (Natalie)

“How to ride one-handed.” (Yadira)

“How to use both brakes to go down a hill.” (Brenda)

“How to use seven [a hard gear] down hill, one up hill.”(Sophia)

“How to ride safely. Like to use signals and look back before turning left and ride on the right side. All that kind of stuff. Since I used to just ride around in front of my house and I didn’t do any of that.” (Tyson)

“How to use hand signals. And how to control this bike.” (Alyssia)

A look back: our journey to Velo Cult 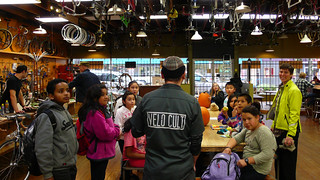 Harvey Scott Bike Club took sack lunches after school on Tuesday, November 5th, and headed out on a field trip. We rode along Skidmore parallel to the Alameda Ridge and then down into the Hollywood neighborhood, where we took over the long table (which used to be a lane at a local area bowling alley) at Velo Cult. Originally from San Diego, Velo Cult is an unusual bike shop – part full service shop, part music venue, part bike museum, and part local hangout.

After lunch, shop staff member Tomas Quinones talked to us and answered some questions:

Nur: “Why aren’t there any small bikes?”

Tomas: “Most of the bikes here are for grown ups, but we can order bikes in any size.”

Josue: “Why are there all of these bikes on the ceiling?”

Tomas: “Those are collectable bikes, mostly handmade. It’s our museum.”

Sophia: “Do you have helmets in any color you want?”

Then we took out a map and Bike Club participants showed Tomas a safe route back to the school. We rode back up the Alameda ridge, east along Skidmore, and back to school in time for Homework Club. 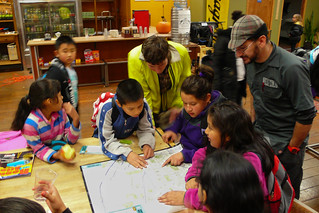 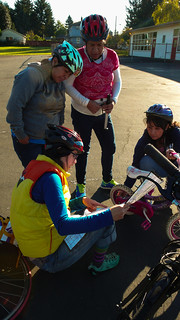 We started off in Wellington Park, where Susana talked to the students in Spanish about ABC and how biking has impacted her life. Lale, from the Community Cycling Center’s Programs’ Team, helped translate for the few students who didn’t speak Spanish (also, the author – thanks, Lale!).

Susana led us on a ride using low-traffic streets to Sacajawea park, where we had some free play and free riding (and also fixed a few mechanical issues).  Bike Club rode so well and so quickly, we had enough time to extend our ride. Susana, Lale, and other ABC representatives consulted a walk and bike map and put together an extended ride back to the school featuring the separated bicycle facilities on Cully. We rode to Rigler School where our friends from ABC left us so they could pick up their own children from after school programs. After a hearty “Gracias!” and “Adios!”, Bike Club headed back to Harvey Scott.

Thank you, Theo, for sharing your favorite Bike Club stories and photos! And congratulations, Harvey Scott Bike Club graduates! We look forward to seeing you ride safely on the streets of Portland.