Kicking off Get Lit at Broadway and Williams

Posted by Momoko Saunders on September 28, 2010 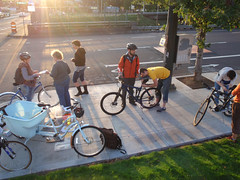 To kick off the fall season of Get Lit outreach and safety events, we decided to start with one of the most dangerous bicycling intersections in Portland: the intersection of Broadway and N Williams. This intersection claims many bicycle/car collisions, mostly due to the high volume of bicycle traffic flowing through an intersection that includes a right hand turn onto the I-5 freeway on-ramp. Just that morning a person on a bike was hit by a car only blocks away.

Last year at this intersection we were able to light up over 100 unlit cyclists in two and a half hours, and this year we were hoping for the same in two hours since it is also the BTA’s Bike Commute Challenge month. We were set up by 6 pm to catch the peak commuter hours, and before we could even get the light buckets out of the Madsen, people on bikes began pulling over for the free lights.

Normally we stage a volunteer a block down to alert the cyclists in advance that there are free lights ahead, but we simply had to put up a “FREE LIGHTS” sign on the other side of the intersection and we were swamped. Seven volunteers and one staff person worked through the crowd of cyclists that were swarming the sidewalk. One volunteer administered the surveys, one installed front lights, and one installed rear lights for each unlit cyclist, so we were able to get them fully lit up and on their way again in about one minute.

As usual, all the unlit cyclists were thrilled, and by 7:45 pm we were down to just a few lights, having installed 75 front lights and 77 rear lights for grateful cyclists. We received $40 in donations, many “thank yous,” several “you made my day” exclamations and countless “I love the Community Cycling Center!” cheers. We rode away that evening knowing we had lit up over 100 cyclists and helped make the streets safer for everyone.

If you would like to learn more about planned improvements to this intersection, check out this recent Bike Portland article.