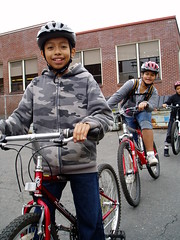 We are proud to report that 58 students from five schools graduated Bike Club this month. Over the past six weeks, these 9-12 year-olds have earned refurbished bicycles and new helmets by attending 12 after-school sessions. They now have the equipment, knowledge, and confidence to be champions of bike safety in their communities.

Marcial (pictured above) joined the class a week late at James John. He rapidly caught up with the group and is now a leader when it comes to on-the-road safety and proper hand signals. His enthusiasm for bikes has clearly helped his knowledge and confidence grow.

Marcial and the other James John students have been enjoying long rides, practicing right-of-way at the three way stop sign, and enjoying games at Pier Park.

In addition, they have been learning about community resources that support them as cyclists. After a tube patching activity, another Bike Club participant, Janeth, said, “I’d rather pump up my inner tube at a bike shop, because at the gas station they charge you a dollar!” 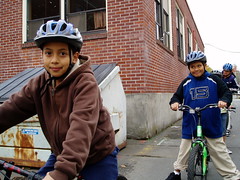 Marcial and Janethâ€™s classmate, Erick (pictured at right in the blue jersey), was less eager to step into a leadership position at the beginning of Bike Club. He shyly and hesitantly participated, letting other students answer questions and take the lead. Through lots of encouragement and a supportive environment, he slowly began raising his hand to answer questions and began speaking out more during the daily debrief. This confidence began to show in Erick’s road skills; he began taking the lane properly when turning left, communicating with other road users, and successfully navigating bikeways.

We have witnessed the positive effects of Bike Club over and over again, but it never ceases to amaze us. Congratulations to all of our fall 2009 Bike Club graduates!