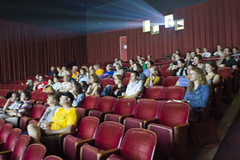 Thanks to everyone who attended our “Remember Your First Bike?” film screening event at the Hollywood Theatre last Thursday. We had a great time, and it was so special to see Chad Berkley’s film on the big screen. The 30-minute extended version provided a behind-the-scenes glimpse into the Holiday Bike Drive, highlighting the thousands of volunteer hours that go into making this event happen each year. Chad informed us that the film will also be showing at film festivals in Davis, CA and one in Galway, Ireland! “Remember Your First Bike?” is now growing into a tool that can be used to encourage people around the world to start their own community programs.

Special thanks to the Hollywood Theatre for donating the space for us to host this event, to Ayleen Crotty of Filmed by Bike for doing such a fabulous job leading our Q&A session, and of course to Chad Berkley for telling this story through the creation of this film. We would also like to thank everyone who donated to the Community Cycling Center at the Hollywood Theatre during our summer fundraising campaign.

Photos from the event can be found on our Flickr page.