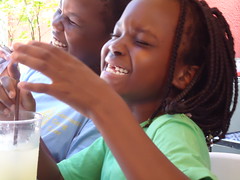 If you have ridden around North or Northeast Portland much this summer, there’s a good chance you’ve seen one of our Bike Camps in action. Groups of school-age young people, riding in neat lines that rival the sleekest pelotons, have spent their days playing in parks, learning about the local bike industry, and becoming budding bike mechanics.

This summer, with generous funding from Nike and Russell Street Bar-B-Que, we were able to provide opportunities for children from families with low incomes to attend Bike Camp. Nine of the 35 children participating in the scholarship program did not have access to a safe bicycle and received one through the program. Our scholarship camps were offered through Scott Elementary, University Park Community Center and at the Bike Camp sessions held at the shop.

At Scott Elementary, a group of seven middle-school aged youth took part in the Urban Riders Bike Camp. Many of the youth told us they had not ridden out of their neighborhood before, so we were very excited to be able to take them all over town. All the participants at Scott live within a mile of school, so when the new school year starts they’ll be equipped with the skills to ride to campus. Campers got to enjoy a visit to the Columbia River, a tour of the I-205 bike path with Friends of Trees, and a ride to downtown Portland. In addition, they visited our shop where they received a tour and practiced removing their wheels and, fixing flat tires. 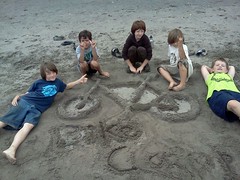 University Park Community Center is a program partner in the New Columbia community. We held two UPCC Bike Camps, one for kids ages 6-8 in July, and one for kids 8-11 in August. The August group enjoyed some long rides around North and Northeast, including a trip to Kelly Point Park where they built a bike sand castle! On the last day they stopped by camp-sponsor Russell Street Bar-B-Que for some icy cold lemonade.

The August group at UPCC included two sisters originally from the Congo. They taught the other campers some words in French, Swahili, and local Congolese dialect. At the end of camp, one girl, Shaunie, shared how she loved that everyone got along and was nice to each other during camp. Parents commented on how much of a positive impact the week had on their kids and how they could get more involved. We’re so glad we were able to experience camp with this great group of kids.

We also had 11 kids receive scholarships throughout the summer to attend the Bike Camps held at our shop. One is a neighbor, Dorine, who is a frequent visitor to the shop. She had a terrific time at camp and has since stopped by to share her new knowledge with our mechanics.

Bike Camp is a great way to spend the summer, and we’re always happy to be able to extend the opportunity to as many kids as possible. Thanks to everyone that helped support Bike Camp this year. We’ll see you on the road soon!