The BikeMobile rolls to Hacienda

Posted by Momoko Saunders on September 30, 2010 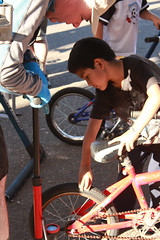 On Saturday, September 25th, with the help of our incredible outreach volunteers, we hosted the inaugural BikeMobile event in partnership with Hacienda CDC. We have been working with staff and residents of Hacienda for over a year now (as part of the Understanding Barriers to Bicycling Project), and this latest event was a community-driven request made by the Hacienda Bike Committee.

Hacienda’s Bike Committee is made up of residents, who are primarily first-generation Latino immigrant women. The Committee asked that we hold an outreach event where we could transfer some basic bicycle maintenance skills to residents while fixing some of their bicycles.

We arrived on in our brand new outreach vehicle, the BikeMobile, stuffed full of tables, tools, tires and tubes. We quickly set up stations around Hacienda’s central building, including a basic bicycle quick fix station, staffed by six mechanics; a flat tire station staffed by four flat fix experts; an I Ride portrait booth, where community members could have their photos taken with their bicycles; and an outreach table where participants could find additional information about riding in Portland.

Our communications dude, Josh, was on hand with a large video camera on a tripod, working on documenting the event. The camera set up was an instant hit with the kids. They dropped their bikes on the grass and crowded around the video camera and Josh took the opportunity to teach the kids how to film. He would give them question prompts to ask while they were filming, and they would become interviewers behind the camera. It was pretty amazing to see an 8-year-old behind a huge video camera with a headset on, filming me pumping up some tires.

We did a quick orientation for all of the volunteers, and Hacienda Community Builder Tanya Wolfersberger gave everyone an overview of Hacienda’s housing community that is comprised of about 85% Latino families and 15% Somali families. After the orientation, we were ready to roll (and so were the kids!).

Bicycles that needed more than just a flat fix were sent to the mechanic station, and Gram, a mechanic at our bike shop and the bike production expert for all of Holiday Bike Drive, played infielder, sending bikes to open mechanics. Our experienced volunteers got to work fixing everything from loose saddles to broken pedals. The flat tire candidates came and sat down on the ground in the flat fix area, and we empowered all of the bicycle owners with tools and patch kits, and walked them through fixing their own flats. Kids became engrossed in the activity, and many of them stayed and helped fix many more flats than just their own. The pumps were the most popular tool, and pumping air into tires and just back into the air, became a game in and of itself.

We closed the day with Japanese lessons from one of our volunteers, and the kids stood in the truck asking him to translate sentences, then they would all repeat it back. They wanted to know how to say things like: “Congratulations, you are going to college!,” and “I am as strong as the Incredible Hulk!,” which was heartwarming, as clearly these kids are already feeling empowered and strong. Also, the Japanese word for Hulk is pretty great, so all the kids and I continued on yelling “Hulkedaya!”, as the truck door closed and we drove and pedaled away.

The day in numbers:

Total length of the event: 2.5 hours
Number of new helmets distributed: 23 (all within the first hour!)
Number of I ride portraits: 19 (Sample quote, “I ride because my bike is beautiful”)
Number of quick fixes: 22
Number of people who learned how to fix flat tires: 20

We would like to extend a special thanks to Legacy Emanuel’s Trauma Nurses Talk Tough program for donating the helmets for the event.