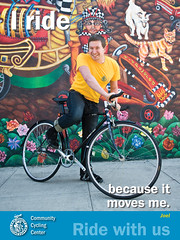 Joel began volunteering in February of 2009 and has donated his time and myriad skills ever since. Joel regularly came in to wrench at Tuesday Drop-In Nights then graduated to installing “CAC packs” â€“ the fenders, racks, lights, pumps and seat bags that adorn the bicycles destined for Create a Commuter workshops.

A gifted photographer, Joel has also helped capture the energy of our programs and events, most recently Bikes for Kids on May 1st.

Stop by the shop from 11-2pm during the NE Sunday Parkways on May 16th to have your I ride portrait taken by this talented fella.

Why do you volunteer here?
One, because the Community Cycling Center’s mission aligns with my own belief that The Bike is an astounding vehicle that impacts lives on a personal and community level. And two, because I get to play with bikes! And hang out with other people who like to play with bikes too!

What is your favorite Community Cycling Center? Why?
I’m partial to the Create a Commuter program, simply because it provides free, fully outfitted ’round-town commuter bikes to adults. Not children. Adults. As powerful as giving a kid his or her first bike is, eventually it will be outgrown. But giving a bike to a grown-up, particularly one who is underprivileged, can alter his or her life. All those things we want The Bike to be, a vehicle for change and community and self-propulsion and health, it becomes when an adult is in the saddle, because then no one can call it a toy. It is a vehicle. I only fell in love with bikes when it became my primary mode of transportation, when I became a bike commuter. I suppose I like being able to spread that same feeling.

What is your dream bike?
A minimalist touring bike with a steel frame that I will ride across every continent. It will have a sleek black paint coating with “WORD TO YOUR MOTHER” printed on the top-tube. Oh, and a laser canon.

What are you calling your volunteer position these days?
CAC MASTER.

What do you do when you’re not volunteering here?
I currently serve in a full-time Americorps position where I coordinate tutoring for youth who are trying to get their General Education Diplomas. I also work as a writer/editor and run a silly arts and entertainment website, NinjaPancakes.com.

What would the title of your biopic be? Who would play you?
“More Awesome Than Superman, Batman, Spider-Man, and the Incredible Hulk Put Together: The Joel Schneier Story.” I’d probably be played by Elijah Wood or Seth Green.