Our response to Monday’s Oregonian article on New Columbia

We were deeply saddened to learn of the shooting that occurred on Sunday at a New Columbia pocket park on North Woolsey Avenue. Resident Sergey Dronov was quoted in an Oregonian article as saying, “I don’t think there’s enough attention paid to this part of town.” In some ways he is right. The cycle of violence has continued for too long at New Columbia. But the entire article conveys a dire picture that doesn’t match our experience of the creativity, collaboration and caring of many residents and community partners who are working together to create a positive picture at New Columbia.

One of our favorite projects is the Village Market, a community-run healthy corner store, which has been open for 9 months and is committed to providing quality, fresh, healthy, and affordable groceries. They sell produce from the Food Works Farm, an organic farm run by young people from New Columbia. 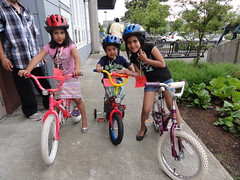 For the past two years, the Community Cycling Center has developed and supported a bike committee based at New Columbia comprised of residents. We’ve worked together to organize bike fix-it fairs, repair workshops, and earn-a-bike programs. We also work closely with a group of residents who formed We All Can Ride, which organizes rides for kids to area parks for fun summertime adventures. We All Can Ride and other residents are so committed and excited, that we are working with them, the Boys & Girls Club and HomeForward to transform a vacant lot into a bike skills park and repair space.

There are more inspiring people and their stories on the New Columbia website, like Linda Dougherty, who won a gold medal in bowling at the Special Olympics. And Angel, a student who recently earned a full scholarship to Brown University.

We recognize that these are small steps in helping to build a healthy and safe community, but they are positive steps that we and others are taking. The reality is that it will take this and much more.