This is the second of a two part series following the James John Bike Club participants from rag tag beginnings to their emergence, six weeks later, as experienced and confident riders. You can read part one here. 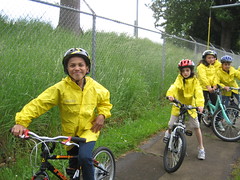 After six brief weeks, the James John Elementary Bike Club has come to a bittersweet close. I could easily have spent another six weeks with this group, but they had learned what they needed to learn and were ready to venture out on their new bicycles without our supervision.

During the final weeks leading up to graduation, we relinquished the reins to the students more and more. We had seen confidence bloom and knew that our students needed to put into practice what they had learned.

One of our most improved students, Jorge*, was barely able to speak in front of the group at the onset of this program. During the final week, he was eagerly leading group rides around the neighborhood and directing us to “transform into pedestrians!” when we came to a busy intersection. At his cry, 15 students and three instructors would dismount and line up on the sidewalk to cross in a safe and orderly fashion. Another student, Rebecca, helped her peers identify and correct issues that arose with their bicycles, such as patching a flat or reattaching brake cables. These students, along with the rest of the group, had not only earned their bicycles, but they were also ready to share their knowledge with others. 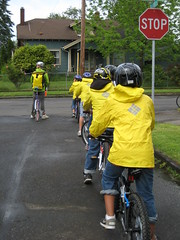 On our final Bike Club, we proudly set off on the graduation ride, dropping each student off at home. When we left the school, the weather was perfect and our first stops went off without a hitch. Parents were waiting anxiously by the front door to give congratulations and take pictures of the new graduates. The looks of pride on the faces of both parents and students were so heartwarming.

As we made our way from house to house our little group shrank, and then the weather started to turn. When the rain came we still had three stops to make and a little (ok, a lot of) rain was not going to stop us. We were soaked through but still smiling as we came to our last stop.

Gareth, the last student to be delivered to his home looked at me and asked “Are you going to ride each other home now?” I smiled and answered, “You know, I think we might.” As Collin, Kim, and I rode for home, I looked back and saw Gareth, in the rain, getting back on his bicycle and taking off on his first solo adventure.

* All studentsâ€™ names have been changed to protect their privacy.